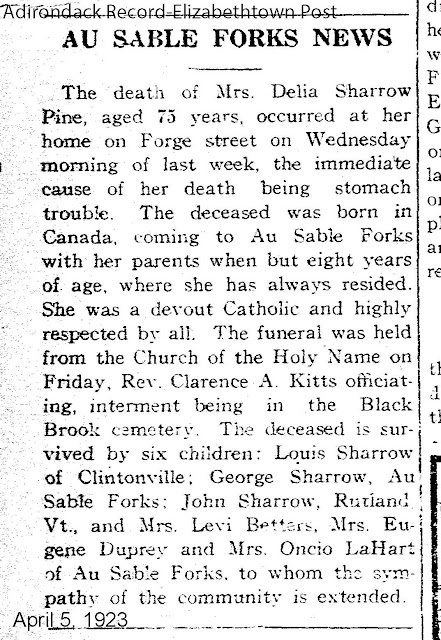 The death of Mrs. Delia Sharrow Pine, aged 75 years, occurred at her home on Forge street on Wednesday morning of last week, the immediate cause of her death being stomach trouble.  The deceased was born in Canada, coming to Au Sable Forks with her parents when but eight years of age, where she has always resided.  She was a devout Catholic and highly respected by all.  The funeral was held from the Church of the Holy Name on Friday, Rev. Clarence A. Kitts officiating, interment being in the Black Brook cemetery.  The deceased is survived by six children:  Louis Sharrow of Clintonville; George Sharrow, Au Sable Forks; John Sharrow, Rutland, Vt., and Mrs. Levi Betters, Mrs. Eugene Duprey and Mrs. Oncio LaHart of Au Sable Forks, to whom the sympathy of the community is extended.

Delia was my maternal great great grandmother.  More to come on her....as soon as I find it!!
Posted by Denise C at Wednesday, March 28, 2012