In honor of "March Madness", here is a photo of the Au Sable Forks Stars 1927-28 featuring my grandfather, Ernest "Red" Senecal. 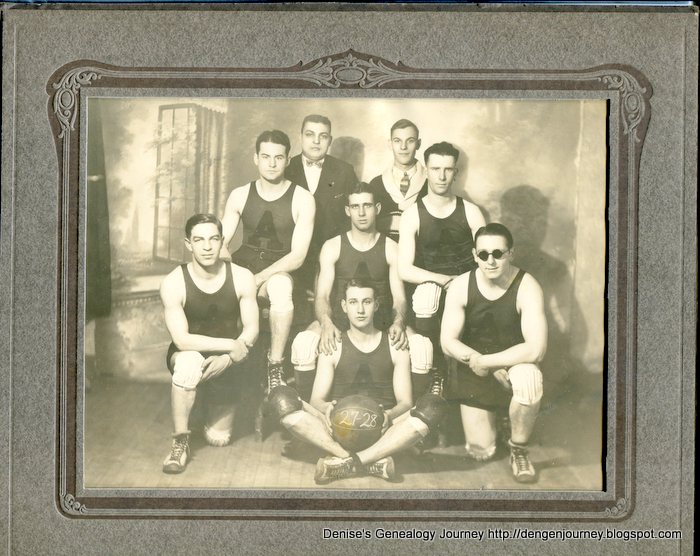 I also found this write up on the beginning of the season:

Believing that an Adirondack basketball league of professionals could be a success because it would naturally create a friendly spirit of rivalry and keenest interest between the several towns in the circuit, the professional basketball quintet of Au Sable Forks expressed itself favorably inclined to the movement at a recent meeting of the member and that it would willingly join a league embracing the following:  Plattsburg, Port Henry, Plattsburg Barracks, Lake Placid, Lyon Mountain and other nearby places.

Local basketball fans feel that Au Sable Forks has still a better chance this season than last for the team has the same line-up.  This means better team-work as each player is thoroughly familiar with one and the other’s manner of playing.  The quintet should move with the perfection and smoothness that come with years of playing together for all of them are former high school stars who have fought side by side, year after year, as professionals, ever since their high school days.

The local courtsters await with much interest what action, if any, promoters of professional basketball will take on the foregoing suggestion anent the formation of an Adirondack basketball league.  What say you?

Maurice Votraw was unanimously elected captain and coach at the aforesaid meeting, an indiction of the players’ confidence in Mr. Votraw’s abilities and their own determination to uphold the proud name of Au Sable Forks in Northern New York basketball circles, knowing that the coaching of Mr. Votraw, will be an asset not to be considered lightly while his leadership, they feel, will bring the team to heights of enviable success for the season of 1927-28.

I know Albert "Nip" Votraw is on the right, first row, kneeling and my paternal grandfather, Ernest "Red" Senecal is right back him.  Those are the only ones I can positively identify. (Hopeful others will be able to identify the rest!!)

I have seen "Maurice Votraw" also listed as "Morris Votraw" in some write-ups.  If it's "Morris Votraw" then he is the husband of my maternal grand aunt, Doris Senecal Votraw, sister of "Red" and Ray Senecal.