Here is a picture of a portrait painted when he was 2-3 years old.  The original frame did not survive one of my many moves so the quest is on to find an appropriate new one. 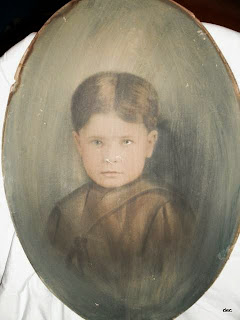 Grandpa Red loved sports and played baseball and basketball in high school.  He also played in the town team baseball leagues in the 1920's.  He played second and third bases and was usually a lead off hitter.  I am going through the Northern New York Historical Newspapers (See Website Wednesday) to find more game summaries.

NOTE: A good reference book for North Country baseball is "The Only Game In Town: A Century of North Country Town-Team Baseball 1860-1960" by Robert M. Garrow (Bloated Toe Publishing, www.bloatedtoe.com, 2009) .

Here's a picture from my GOLDMINE.  I know Grandpa Red is on the last row, second from the left, with the hat by a manager. I wish I knew more about the picture but hopefully one day I will!! 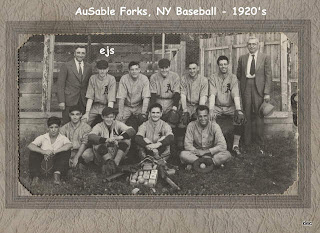 Well, one of my favorite sayings is "Better Late Than Never".  So Grandpa Red, Happy Belated Birthday!! And as I like to say, "GO TEAM"!!
Posted by Denise C at Monday, December 26, 2011