50th Anniversary of Dad's Accident and THAT Tree

From the front pages of the Adirondack Record-Elizabethtown Post on Thursday, August 29, 1963:

Thomas Coughlin, 19, son of Mr. and Mrs. David Coughlin of Jay, is resting comfortably at the Champlain Valley Hospital, recovering from injuries sustained in a single car accident Sunday night on the curve on the Jay-AuSable Forks highway near the residence of Henry Lincoln, while he was driving to his home from AuSable Forks.

He fell asleep at the wheel and was alone at the time of the accident, the car leaving the highway and hitting a tree head-on.

Young Coughlin sustained a slight back injury, scalp wound, laceration of shoulder, elbow and hand. His condition at the hospital was described as good Tuesday.  He was taken to the hospital in the Zaumetzer-Sprague ambulance.

The car was a complete wreck and towed to the premises of Sid's service station at AuSable Forks.

Where to begin.  First, this "da#%^" tree.  When I visited in 1992, I heard about this tree from EVERYBODY.  Everybody. My talkative aunt, her quiet husband (at least compared to the Coughlins!!) and people I didn't know. It was hilarious!!  I have no idea if this poor tree is still standing as the area was hit hard by Hurricane Irene in August 2011 but if it is, I know several people who would still be able to point it out!!!

The ambulance company...also the local funeral home.  Didn't know they had an ambulance at one time!

Let's just say this was a wake up call of sorts for my father as he joined the Navy shortly thereafter. I heard a couple of good versions from my father, grandmother and uncle but there are still statues of limitations in place on family stories :)

Here are some photos.  I know Daddy said at one point these were from one of his car wrecks.  Not sure if these are from this accident but here they are anyway: 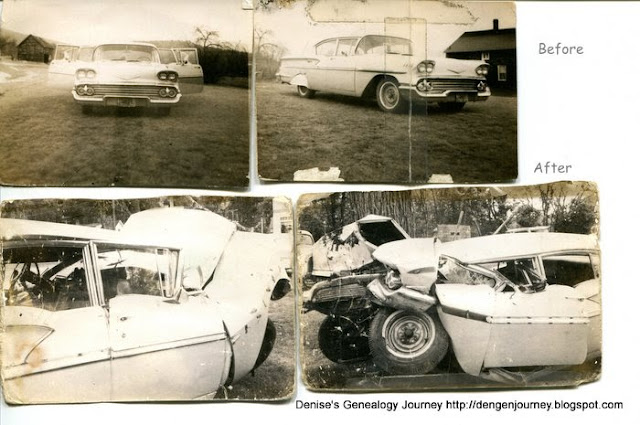 When I first started in genealogy I thought the fact my parents were from small towns in northern New York that I would find a lot of information.  Thanks to power of the internet and online newspapers (see Website Wednesday for my love of this!!), I am finding out all sorts of little details about my parents and relatives that I never thought I would!!