Another "Newspaper Nugget" from the pages of the Adirondack Record, August 5, 1921: 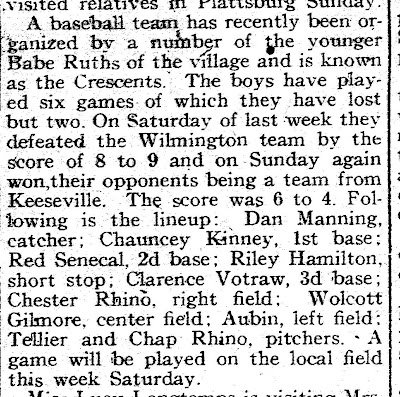 A baseball team has recently been organized by a number of the younger Babe Ruths of the village and is known as the Crescents. The boys have played six games of which they have lost but two.  On Saturday of last week they defeated the Wilmington team by the score of 8 to 9 and on Sunday again won, their opponents being a team from Keeseville. The was 6 to 5. Following is the lineup: Dan Manning, catcher; Chauncey Kinney, 1st Base; Red Senecal, 2d base; Riley Hamilton, short stop; Clarence Votraw, 3d base; Chester Rhino, right field; Wolcott Gilmore, center field; Aubin, left field; Tellier and Chap Rhino, pitchers. A game will be played on the local field this week Saturday.