Natural Disasters. I grew up on the South Carolina coast so we always had tropical storms and hurricanes to deal with during "the season". Even after being gone for many years, every June 1st I feel the need to stock up on batteries and bottle water!! I won a trivia contest (at a bar) for knowing that hurricane season goes from June 1st to November 30th.

After dodging all the big storms and dealing with the minor hurricanes, Charleston's luck ran out in 1989. Hurricane Hugo hit 21-22 September 1989 as a Category 4 storm. He hit at night. For years I couldn't sleep at night when it rained. We lucked out in that we had minor damage. Got a new roof. For weeks we were without power. That I learned to accept. Being without water for ONE WEEK was killer. You'd go to wash your hands after cleaning up debris and nothing!! We had a rain storm a few days after the storm hit. My sister and I went to the backyard and let Mother Nature be our shower!! Washed the hair, cleaned the body, felt good!!

I guess that's why seeing the whole mess with Hurricane Katrina got to me. That could have been Charleston, Savannah or any city on the East Coast. A hurricane that hits at high tide is the worst. New Orleans had double whammies with being at or below sea level and the levies.

But hurricanes are a fact of life on any coast and have been for years. The photo below was taken less than a month after Hurricane Hugo hit in front of the Slave Market. I think that sums up not only Hugo but all hurricanes!! 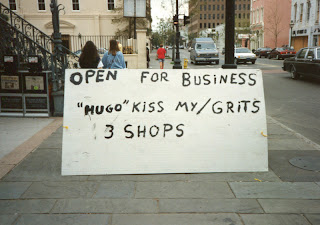