He was born in Lake Placid on March 20, 1909, the son of Daniel and Agnes (Williams) Coughlin.

He spent most of his younger days near Palmer Hill near AuSable Forks.  For several years, he worked in a defense plant in Worchester, Mass.  He worked for many years as a salesman for Plattsburgh Electric Supply.

Mr. Coughlin was a communicant of Holy Name Church, in AuSable Forks and was a former member of the Jay Fire Department and the AuSable Forks Board of Education.

The funeral mass will be held 10 a.m. Tuesday at Holy Name Church in AuSable Forks.

Burial will be in the parish cemetery.

Donations may be made in Mr. Coughlin's memory to the Holy Name Church Debt Reduction Fund. 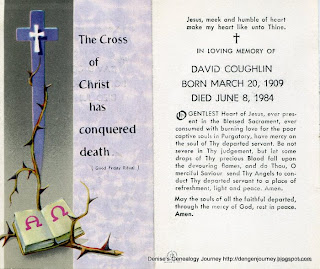 I remember this like it was yesterday.  My father had just retired from the Navy (20 years) and we were on a REAL vacation visiting friends and family.  We were on our way to visit my grandparents when we got the news the night before we were to be in Jay that Grandpa had died.  He was getting in a round of golf before we came.

The Calling Hours were a shock to me.  Two days in shifts.  I remember being overwhelmed by the whole thing and the director of the funeral home, Charles "Charlie" Zaumetzer brought me back to their living area to watch TV.  I remember him telling jokes and being very nice to us.  (Of course, quite a few members of both sides of the family went through his funeral home!)