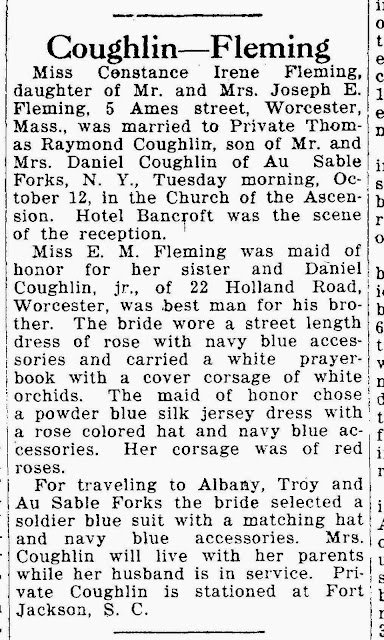 Miss E. M. Fleming was maid of honor for her sister and Daniel Coughlin, jr. [sic], of 22 Holland Road, Worcester, was best man for his brother.  The bride wore a street length dress of rose with navy blue accessories and carried a white prayerbook with a cover corsage of white orchids.  The maid of honor chose a powder blue silk jersey dress with a rose colored hat and navy blue accessories.  Her corsage was of red roses.

For traveling to Albany, Troy and Au Sable Forks the bride selected a solider blue suit with a matching hat and navy blue accessories.  Mrs. Coughlin will live with her parents while her husband is in service.  Private Coughlin is stationed at Fort Jackson, S.C.

Constance Fleming Coughlin remarried in 1947 and had 2 daughters.  She died in 2008.  She was originally from Scotland and stayed in Massachusetts from the 1930's till her death.

Unfortunately one of the many war widows through out the ages......